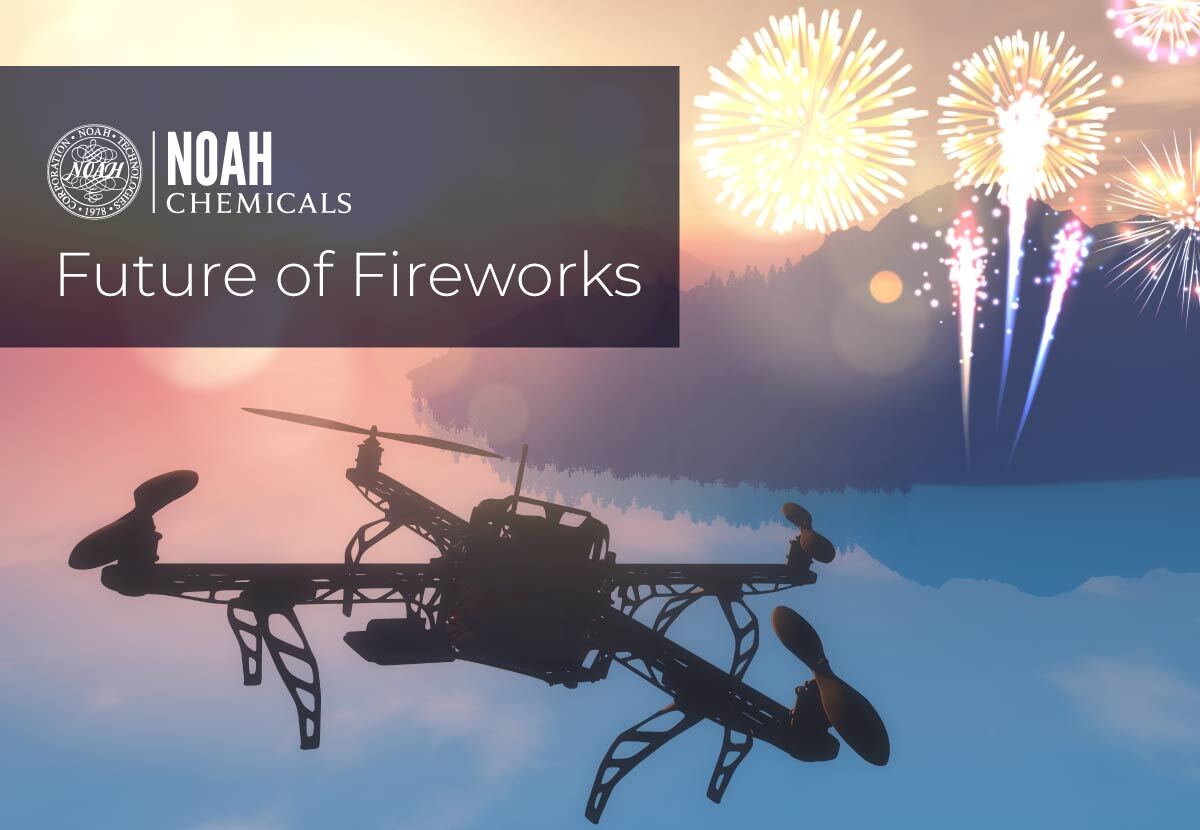 The Chemicals and Science Behind Fireworks

Plus: Drone Light Shows and Noah Chemicals’ Path to Sustainability

For many people, fireworks are synonymous with summer. Fourth of July fireworks displays are an eagerly anticipated event throughout the United States; in Sydney, New Year’s Eve celebrations are punctuated by the sights and sounds of an elaborate show staged above the Harbour. But have you ever taken a moment to consider what chemicals are involved in producing fireworks? As with so many things, the answer to this question involves chemistry.

The Science Behind the Spectacle

In order to create the bold, beautiful colors that delight people in fireworks displays, manufacturers depend on precise combinations of specific chemical compounds. Certain chemicals are considered go-tos for certain colors; for example, bright red is always made from a strontium compound, either nitrate or carbonate. Blue hues are achieved using copper, barium nitrate is used for green and white is the result of magnesium. As you would with paints in a palette, you can blend different ratios of chemicals to produce different variances in color. Orange is created by mixing calcium salt and sodium salt, while copper and strontium combine to produce purple.

Of course, fireworks involve more than just color; you need to incorporate additional chemicals to ignite these colors. This is where sulfur, charcoal, and potassium nitrate – otherwise known as gunpowder – come in. When combined in precise measurements with the color chemicals, the gunpowder creates an explosion that disperses these colors in the sky as they burn. Another result of the gunpowder explosion: those familiar booming sounds that we’ve come to associate with fireworks displays.

At Noah Chemicals, we are firm believers in the importance of accountability – so much so that it’s one of the five core principles of our Noah Standard. We work hard to hold ourselves accountable in every aspect of our mission, not only to our clients and each other but to the planet. While we are proud of the partnerships we have formed with fireworks manufacturers and the services we have provided to them over the years, we’re also acutely aware of the negative impact that traditional fireworks have on the environment. Fireworks may be thrilling, but they are not without their downsides – particularly with regard to their environmental impact. In addition to releasing harmful pollution into the air, some of which lingers for hours or days, fireworks displays result in particles being deposited all over the ground, contaminating the soil and water, harming local wildlife, and sometimes sparking wildfires.

In an effort to be as “green” as possible, Noah Chemicals has recently changed its focus from providing chemical components for fireworks displays (though we continue to source strontium nitrate and barium nitrate for emergency flares, which are used on the road and at sea, respectively). Instead, our work with electronic manufacturers leads to something different but equally exciting: drone light shows.

So what exactly are drone light shows? Like fireworks, they offer breathtaking displays of color that fill the sky in various patterns and designs. But the technology behind them is quite different. Drone light shows involve the use of a fleet of small, flexible drones, equipped with GPS sensors and LED lights that display countless color combinations; programmed in advance; the drones are operated remotely by a team of experienced engineers. Drone light shows emit no air or ground pollution and do not produce any loud noises; the equipment is also reusable, and shows can be displayed in much tighter spaces than traditional fireworks (since there is no risk of fire or environmental damage).

Electronics play a key role in the manufacturing of drone light shows, and Noah Chemicals is a key supplier of electronic grade materials to clients in nearly every industry. By supporting a new technology, we’re helping to keep the magic of fireworks-style displays alive – while also ensuring that people all over the world can enjoy that magic without any harmful repercussions.

For more information on how Noah Chemicals can provide your business with the right chemicals please contact us here.