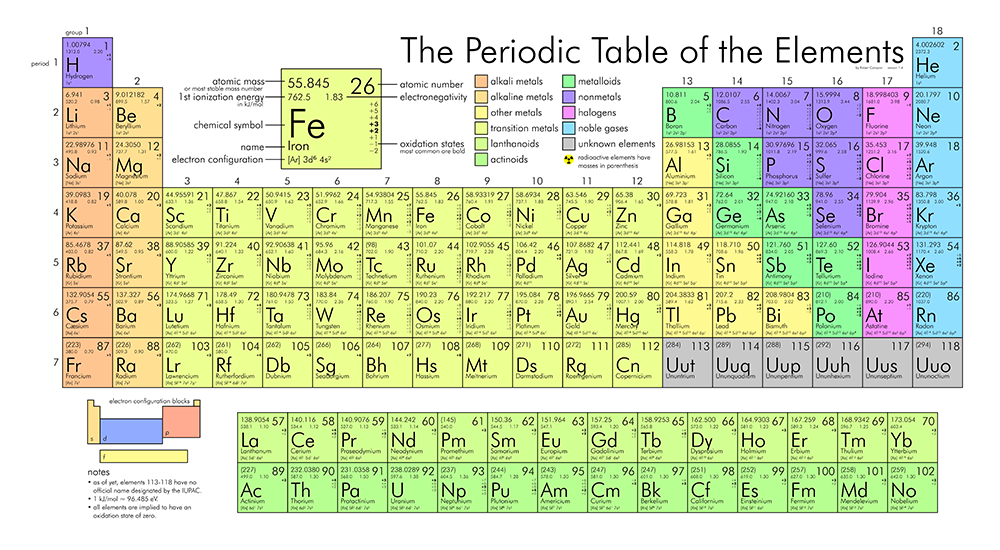 Meet the Four Newest Elements of the Periodic Table

Unless you’re an organic chemist, you may not have heard that four new elements were added to the periodic table in December of 2015. The announcement was largely under the radar, in part because the elements didn’t yet have names at the time, instead being referred to by their atomic numbers: 113, 115, 117, and 118.

As of just this month, the International Union of Pure and Applied Chemistry (IUPAC) has officially designated the elements with names, and placed them in their rightful spots on the periodic table, rounding out the seventh row.

All four of the elements were lab-synthesized, all at different locations between 2002 and 2010. It wasn’t until 2015, though, until the IUPAC officially recognized and validated the discoveries. Each of the elements is super-heavy and highly-reactive. And, fun fact, did you know that the IUPAC requires all new elements to be named after a place, a scientist, a mineral, a descriptor of the element, or a mythological reference?

Named for its location of discovery, Japan; The word Nihon is a derivative of Nippon which means “Japan” in Japanese. The element will be abbreviated Nh.

Also named for the home city/city-state of its discoverers, who are from Moscow. They worked with a team of scientists in conjunction with the discovery of element 117, too. The element will be abbreviated Mc.

This element is named after Tennessee, the home state of some of the researchers who worked to discover it. It’s abbreviation will be Ts.

The only one of the four not named for a place, Oganesson was named by the team of scientists who discovered it in honor of Yuri Oganessian, a prolific “element hunter.” The element will be abbreviated Og.

What is special about these new elements? For starters, they’re all highly, highly unstable – the longest half-life of the bunch is Nihonium at just over 20 seconds. Interestingly, Oganesson is now the heaviest known element, and it doesn’t bond easily with other elements, and the team of scientists who discovered it actually pose that it could be, in fact, the first-ever “noble solid.”

Want to know more about the rarest and hardest-to-produce elements on the planet? The team of chemists at Noah Tech stays up to date on the latest in organic chemistry and applications it may have to manufacturing, production, and the commercial chemicals industry. Want to talk shop? Reach out to us today.