Halloween is just around the corner! This year, our expert chemists here at Noah felt compelled to share the science behind one of the staples of Old Hallows Eve: “The Zombie Apocalypse”.

Here are some common elements, characteristics, features and the chemical compositions behind a zombie apocalypse.

The first portrayal of zombies in America was in the year 1968 in the horrifying, classic movie, The Night of the Living Dead. Deceased humans “rose from the dead” from their graves under the dirt ground. Typically, a human must be bitten by a zombie to turn. However, the origins of the first zombies became the “living dead” emerging from their graves. Perhaps, the soil was contaminated? Did diabolical chemicals in the soil cause these creatures to reanimate from under the ground? Contaminated soil is polluted with chemicals that are harmful to humans. Mining, dumping, improper waste disposal, leaks, and other negative environmental factors cause materials like heavy metals, pesticides, oils, and other chemicals to seep into soil and water supplies.

To protect humans and the environment from these contaminations, the US Environmental Protection Agency (EPA) and other agencies in America work to regulate the amount of contamination that is allowed in the soil and water. Companies and Potentially Responsible Parties (PRP) that are non-compliant are then required to clean up the soil, purify it and revitalize it utilizing what is called Soil Remediation.

Soil remediation refers to the process of cleaning or restoring contaminated soil in order to make it safe for use again. Some common types of soil remediation include thermal treatment, bioremediation, stabilization, and oxidation.

Thermal soil remediation utilizes high heat to vaporize, decompose, and extract pollutants. Depending on the soil, either low-temperature techniques ranging anywhere from 300 °F to 1,000 °F will be utilized or incineration techniques will be utilized at higher temperatures from 1,400 °F to 2,200 °F.

Stabilization physically binds contaminants so they cannot leach into groundwater.

Chemical oxidation by introducing reagents such as hydrogen peroxide, sodium permanganate and activated carbon, the process facilitates chemical reactions that neutralize toxins and convert pollutants into innocuous substances. This method can be particularly effective in breaking down organic compounds, such as petroleum hydrocarbons. In addition, physical techniques like aeration can be used in conjunction with chemical oxidation for even further effectiveness. While in some cases this method may not completely remove all traces of contaminants, it does have the benefit of being cost-effective and relatively quick compared to other remediation techniques. Overall, chemical oxidation presents a viable option for cleanup thanks to its high level of effectiveness and low cost compared to other remediation methods.

These remediation methods can be performed in-situ, or at the site of contamination, or ex-situ, in which contaminated soil is excavated and treated elsewhere before being returned to its original location.

Ideal zombie Soil would be rich with NPK. Nitrogen, Phosphorus, and Potassium. Noah supplies the highest quality soil additives and fertilizer supplements for your needs no matter how macabre.

Zombies reek of rot, ammonia, and rotten eggs, amongst other foul smells. They are the walking dead after all! That nasty odor coming off zombies can be made up of ammonium sulfide, NH4, which is a yellow, crystalline (sand-like) solid that is usually in a water solution. When in an aqueous solution, these chemicals release hydrogen sulfide gas, which gives off a rotten egg or “stink bomb” smell. Ammonium Sulfide is also used in manufacturing of photographic developers and textile manufacturing. Are there any ways to utilize these nasty smells to your advantage during a zombie apocalypse? Well, according to chemist Raychelle Burks, you can make your own zombie survival “death cologne” with cadaverine and putrescine, which are both found in decaying flesh of deceased humans. Spray it on your body to camouflage yourself with the zombies, “and if you smell like a rotting corpse, says Burks, chances are good that zombies will pass you by for a fresher meal.”

Zombies’ bodies are typically decomposed, slimy, and filthy all around. They are also stronger than humans and can withstand getting around with broken limbs, missing body parts and open wounds. These injuries and open wounds appear to be in a constant state of infection, and you will often see zombies covered in a green or blueish gray slime. Slime is made after a chemical reaction between two main ingredients; polyvinyl alcohol and borate ion. Both of which you can find in everyday household items to make your own zombie slime! Polyvinyl alcohol can be found in simple PVA glue and borate ion is created when bicarbonate of soda (baking soda) is mixed with contact lens solution. When the diluted school glue, or polyvinyl alcohol in water, is combined with a solution of borax in water, the result is something sticky and gooey. But what’s happening on a molecular level? The borax dissolves into separate sodium and tetraborate ions. These tetraborate ions react with water to produce boric acid, which then reacts with more water to form the borate ion. This borate ion forms hydrogen bonds with the OH groups of the polyvinyl alcohol molecules from the glue, linking them together to create a new polymer – slime!

Zombies have spent anywhere from months, to years, to decades and if not, centuries entombed. You will notice a zombie has tattered and faded clothing on that is usually covered with dirt, a variety of different oils, and slime as we discussed above. Zombies spend most of their time outdoors exposed to the Sun. UV rays alone can cause clothing to fade. Along with sun damage, faded clothes can be attributed to hard water which is comprised of large amounts of Magnesium and Calcium. Additionally, Chlorine in tap water which is used to eliminate bacteria causes release of dyes from textiles. Friction from never removing their clothing and tears and rips they get along their never-ending drive causes significant wear and is what gives them their unique style.

Tombstones mark where a zombie once laid to rest. They are made from a variety of materials including:

Spooky fog adds a sense of dread to any situation, especially one that involves discovering disheveled graves with missing bodies and zombies on the loose! Special effect smoke, fog, and haze can be chemically recreated using compressed CO2, liquid carbon dioxide (CO2) or solid carbon dioxide (dry ice) along with liquid nitrogen (N2). Additionally, glycol/water mixtures can be used to produce these effects. Please download and share our Chemical Anatomy of a Zombie Apocalypse infographic. Our team here at Noah Chemicals wish you and your family a Happy and safe Halloween this year! 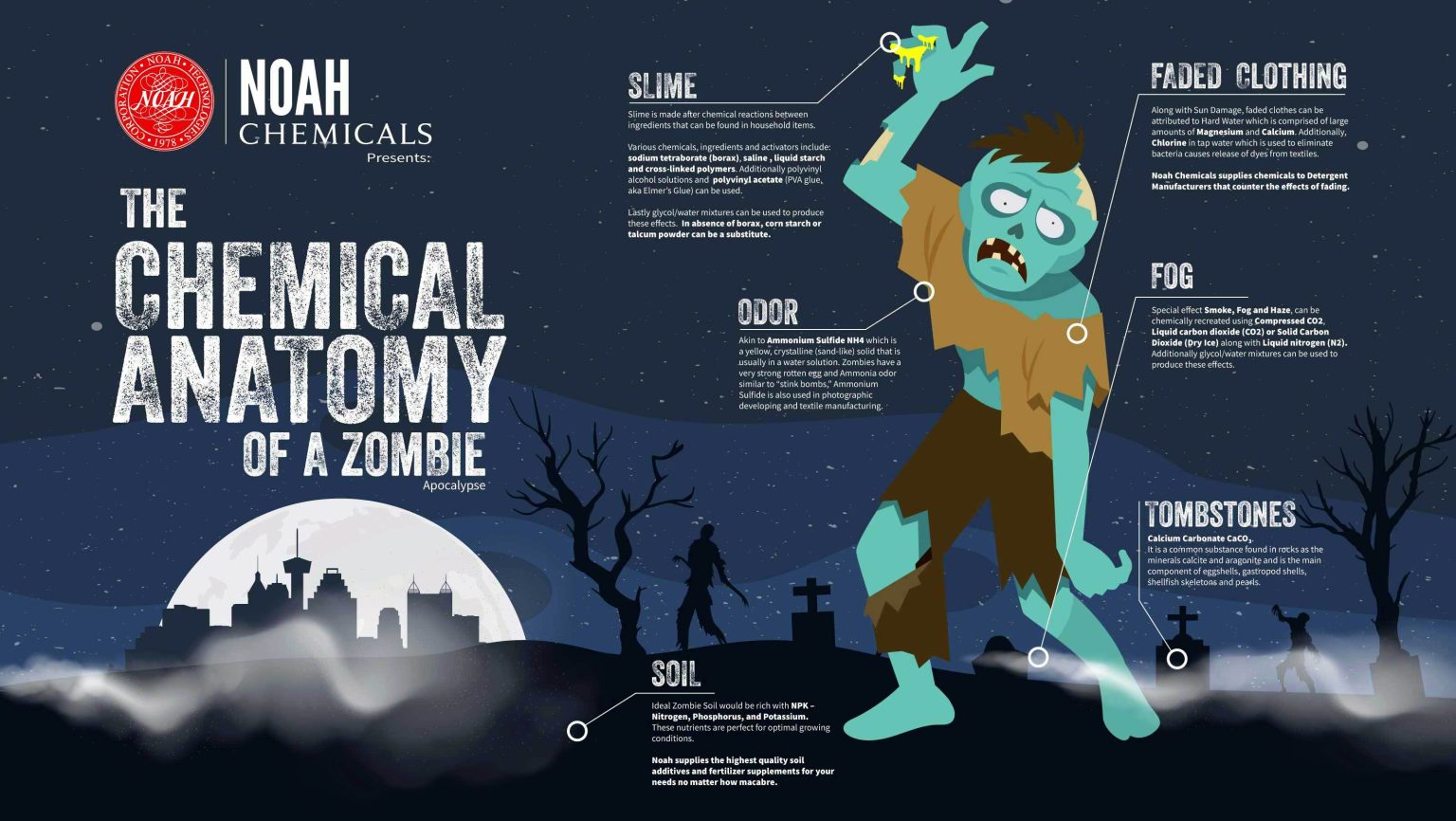